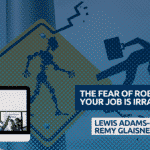 Lewis Adams-Dunstan: And I’ve got one thing I want to dive into quite quickly in this conversation is the fear that everyone seems to have when we mention the word robotics and what that means for their job moving forward.

I think this fear is as old as novelty technology exists the day people were caring about Pigeon, the day we invented Telegraph, those people were in trouble saying, “oh, my God, this is replacing my job. What do I do with that?” And this will go on and on and on and on for a while. Now, the reason why people specifically about robotics have some kind of fear is that they look at robotics as something that can actually act and think like a human being. But this is not exactly robotics, this is not what the aim of robotics should be.

If you think about human cognition, the way we understand our environment from a spatial perspective, from an anticipation perspective, a machine cannot exactly do that. So basically, the robotics that I’m following, the robotics that I’m pushing forward is more. Can it be an autonomous system that can do something that actually people cannot do? So, it doesn’t put the people outside of the equation. It basically augments what people can do as part of some kind of operation.

To that respect, I understand where that comes from, but I don’t think this is a really legitimate fear that people should have.