What Makes the Hiring Process Toxic 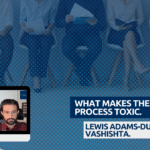 Lewis: So welcome back to anyone that’s been kind of following this series of preparing the unprepared. I’m aiming basically to connect with a bunch of different thought leaders in the space to ideally help people make smarter career and hiring decisions to do that I have basically picked a bunch of different topics alongside these thought leaders. And we’re going to dive a little bit deeper into each specific area, and today we’re going to be actually talking about toxicity in the hiring process because I think when toxicity is rife, it really does affect every single member of staff, and needless to say, I don’t think anyone really enjoys working in a negative environment. So to do that, I’ve actually got a friend of mine Vin Vashishta who’s a chief scientist at Data by V Squared. Vin is another person that I’ve been following for some time he’s got over ninety-thousand followers or something crazy like that. He’s got a degree in physics, an MBA, and has been listed as one of the top voices on LinkedIn in 2019. So welcome to the show Vin.

Vin: Thank you. Thanks for having me. And thanks for hosting this topic, a lot of people will judge this, so it’s important, I appreciate it.

Lewis: Yeah, I think, we’re both people who can speak our mind and touch on things that people are a little bit afraid to approach. So, if we can cover some of those things here, hopefully, it will help people make better decisions moving forward. So let’s dive in straight away, there’s a bunch of different topics within this subject that we’re going to cover around kind of what makes the hiring process toxic, how does that reflect on your business, how to spot toxicity in the data science team specifically because Vin has some experience in doing that, and then we’re going to hopefully come up with some ideas around behavioral practices that create better functioning processes and increase your hiring success. So whilst we’re doing that, you are welcome to send us any questions and we’ll kind of answer them as we go, so fire away Vin, what is your opinion, makes the hiring process toxic?

Vin: The first thing that companies kind of realize when they’re dealing with a hiring process and starting to look at it from a research perspective and a scientific perspective, which is something I’ve spent about five years really looking at what’s what is the best way to hire. And it rarely has anything to do with a degree. It rarely has anything to do with years of experience. Those are sort of the areas that your requirements get funneled into, and they don’t relate to employee outcomes. They don’t end up having a whole lot of impact. But those are two areas where you start to see toxicity reach into the hiring process because it sort of starts to push away candidates, so instead of hiring is an inclusive process where you want as many candidates as possible and you want different backgrounds, you begin to funnel people through those two requirements and then everything from there is sort of skewed. So companies like Google and Facebook and a lot of these companies that are starting to look at more advanced hiring practices have moved away from the degree requirement. The federal government of the United States has also moved away recently from the degree requirement. And so we’re starting to see an understanding of just the basics of where toxicity starts, and that’s the foundation it’s really creating a process that’s excluding versus including. And anytime you see that there’s a criteria of hiring, where you’re trying to weed out as many candidates as possible rather than try to bring in as many candidates as possible. That’s the seed that starts your toxicity in the hiring process. And from there, it just gets worse because you’ve set the example for the interviewers, many of whom, especially data scientists, machine learning engineers, and researchers, they’re not experts in hiring and a lot of HR teams, as much as they try as many hours of training as they can put into this, it’s hard to get a team even that’s science-driven, that’s research-driven to start researching hiring, what questions to ask, and how to create a rigorous process. And so, again, now you have another layer of toxicity added on. You have a group that’s trying to exclude candidates, trying to eliminate the weakest candidates. And then you have a group who doesn’t really have a large awareness of what a well-researched, well-created, well-structured hiring process is. And it begins, as I said, it layers on top of each other. Now you’re hiring people who are similar to the people that are already in place because those are the ones who are most comfortable. You start looking at hiring decisions in the morning versus hiring decisions in the afternoon.