Thinking of Interviews as Part of the Onboard Process 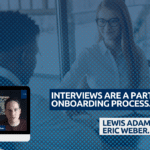 Eric: What are some of those like when you think about pitfalls that companies go through? Because I think it’s illuminating for candidates to understand the on the company side, it’s often much messier and much more inconsistent than you’d like to imagine. There’s not this like beautiful streamlined funnel that’s happening. It’s more like chop, chop, chop, chop. OK, we think of it now. So I’m curious your perspective, what are some of those pitfalls that you see companies run into? Because I think it’s helpful for candidates to understand how to be responsive to what might actually be happening on the other side.

Lewis: I think there’s a few things that stand out for me. I could mention some of the things that I think work really well that I’ve seen. But communication is one of the biggest challenges that seems to be often a disconnect in whether that be my ability to communicate with the recruitment team or the Hijau manager. Sometimes I’m not even allowed to do that as an external worker that has two channels, which if if they’re well oiled, it works pretty well. There’s a lot of time where even people will have a first or second interview and then you just don’t hear back for two weeks. And the person that’s on the other end that’s supposed to be getting feedback even becomes so busy or they just disappear. Like it baffles me sometimes about how you can get really excited about a candidate in the process and then out of nowhere, just have nothing to come back with, will be like, hey, we really want to see this guy again. And then I can’t reach you for two weeks. From the perspective of a recruiter, I know how fast the market moves. And if you do that, you will lose good talent. Yes, you will well, there’s no way someone that will move faster. I mean, there’s no way around it. And I think it’s OK on the candidate side, the people who are listening and are thinking about this issue, like there’s certain things that I think are worth tolerating, like understand that turnaround time is a real thing. It takes often getting feedback and getting written feedback from an interviewer, getting that to H.R., getting to a recruiter and then having the hiring manager take a next step like that does take time. So it’s I know in this world we’re used to like instant gratification, but sometimes it’s going to take a few days. But talking weeks when you start talking in weeks to get feedback like it’s OK to be frustrated by that. And it’s also OK to reach out to a recruiter and ask, like, what’s the status of things like to me, a good recruiter, whether internal or external, it almost doesn’t matter. Keeps those communication lines open with the really.

Eric: I mean, really keeps the communication lines open. So it’s OK to say I don’t have an update yet. That can be an update in and of itself. Right. It’s like to be like, hey, I’m waiting or I’ve reached out. This is where things stand. From a candidate standpoint, I do think it’s reasonable to expect, especially when you’re in the process, when they’ve started talking to you and scheduling things here every week or two about where things stand, even if it’s a quick update. I know that doesn’t work perfectly for everybody, but understand that it is OK to advocate for yourself, even with the understanding that recruiters and companies, because it’s a respect thing, it’s a mutual respect thing.

Lewis: We’re all aiming for the same goal. We’re all trying to get to that end goal of you potentially being hired.

Eric: Yes. And not just hired, but being happy. Yes. That type of role. Right. It’s a I think it’s interesting that we often consider, like the onboarding experience to be separate from the hiring process. But effectively during the hiring process, you are onboarding somebody because you’re creating their probably their perception of who you are as a company, like what you want them know. I mean, the first 90 days, probably the first the recruitment process plus the first 90 days really determine like how how long you’re probably going to stay at that company. And the hiring process has such an influence in that, which is why companies that are really good to me understand the importance and they will actually prioritize actual projects for people in order to allow them to focus on hiring, because sometimes hiring gets crammed into this like, OK, you’re already one hundred and twenty percent booked for the week. Now we’re going to add an additional 10 percent onto your already impossible calendar. And the return that you’re going to get from that is going to be not great versus if you block actual time to delegate to the process, you can get. I mean, think about that. Think about what that pays off. If you hire the right person, it’s huge. You know, I saw a job description the other day and I can’t recall which business it was on a site that but they actually listed on the job description what the first 90 days would look like.