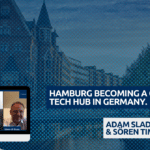 Adam: There’s more and more success stories coming out of Hamburg as a location. If you look back, of course, you’ve got those businesses like About You, Jimdo, Xing, I guess Free Now as well or My Taxi as it was, I think Airbnb, their first office was in Hamburg, and of course, you’ve now got Facebook, Microsoft, Twitter, all of these businesses seeing Hamburg as a location to build.

Ilie: But it’s a no brainer. There’s so much rain in Hamburg, there’s nothing to do but build companies. Exactly, and that’s probably why over here in the U.K., it’s just it’s the same thing. But why do you think Hamburg, for me when it comes to talking to these people, and the conversations, the business starters, the developers and the engineers of the market, it’s always Berlin based conversations that I’m having. Berlin is seen as the tech hub, it’s seen as the tech capital of Germany. But as more and more success stories come out of Hamburg, do you see the tide changing? Do you see Hamburg becoming more of a centralized tech hub specifically in Germany? And do you see it becoming more attractive to potential business owners that are looking at building companies in Germany?

Sören: I believe that there is some really big advantages that Hamburg has, for example, over Berlin, so Hamburg has a smaller startup ecosystem compared to Berlin, this is why it’s much better, I believe, interconnected. So if you talk to a Hamburg investor, if you talk to Chamber of Commerce and other entities within Hamburg, they’re really well interconnected. So you are guided as a startup to create, to fund your business there. So that’s good for the start to get some support, and Hamburg is doing this because they want to create jobs in Hamburg, of course, in the tech space. So I believe that it’s a really a good setup to have a smaller but really good interconnected startup ecosystem there. I think it will become even better if we get more accelerators and more VCs in Hamburg, and the reason why I believe more startups are still registered in Berlin is because there’s more capital. So I think where Hamburg could be better, as is having more capital in Hamburg to found businesses or to finance businesses. But I mean, in general, the whole gaming industry, in Hamburg is like 4000 staff, just with Innogames and others you mentioned retail, About You, My Taxi, Wunder Mobility, but also fintech I believe, and Deposit Solutions is on its way to becoming a unicorn. Exporo is there are also fintechs in the Hamburg. So I believe it will get even better, and once there’s more capital in Hamburg, I believe, I mean, the universities, Hamburg is not known for known for computer science, so there are three universities or two actually, and one where you can’t even do your Masters. But there are two universities. Maybe there could be more investment on that side. But the two are also very good, so you get really educated people, however, in every large city there is a fight for talent, also in Hamburg, but definitely the upsides, and yeah, Hamburg was always an international city because of the harbor so English is not a problem, Berlin is still better by that, but also English is good in Hamburg because of it being a trade city.

Adam: Yeah, I think the reason that Berlin has such an international attraction is because of that international culture, and I think that, to follow in those footsteps, Hamburg is certainly seen to be similar, I think, in that respect. Traditionally, I find that the further south in Germany you go, the more German it becomes. So I think the more international locations North Germany, Hamburg, Berlin certainly would have the attraction, and of course, then what that enables you to have as well is the ability to reach out to all of the talent across Europe as well, talent that is English speaking, that wouldn’t have access to German speaking opportunities, and that gives you, as business owners, the chance to speak to these people as well.

Ilie: Which is, by the way, my case, and moving to Berlin two years ago, I remember just after I came here, there was a statistic that came out saying that Berlin has the most diverse workforce in I.T. in the world, and I don’t recall exactly the numbers, but it was like. 46% percent in Silicon Valley are non natives, and in Berlin it was 48% or 49%, something like this, and that’s pretty crazy when you think about it so one in two people working in tech in Berlin was non-German, and I can only speak for myself, of course, but moving to Germany has been such a nice experience and everyone was so accommodating and, in Berlin and Hamburg as well, going there, everyone speaks English, is very nice, they want to find ways to work together, and that is super, super cool, and I think this is one of the things that I could imagine would be very important for Germany moving forward in the next year or two to continue to attract talent.