Data Science as a Career Path for Women 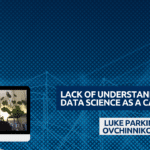 intro:
When there are too many options making a decision can become overwhelming.

In this clip Luke Parkinson discusses the main factors blocking Data Science being viewed as a possible career path. Maria Ovchinnikova determination and drive to complete tasks is what lead her to a career in data science, but she highlights that while at university, her and her peers struggled to recognize how their skills will translate with the data science field, and therefore they wouldn’t think to scout for jobs within that industry.

Watch the video to find out more!

Luke: Obviously, there are points where through the education that you have obviously gone through where it’s obvious that there might be not making it as clear, or given the role models and all things like that, that definitely helps, but you’ve decided to become a Data Scientist through all of that. So why?

Maria: Well, yes, let’s see. So I did struggle myself to kind of, really choosing the career path and kind of focus in different areas. You have so many options, it’s almost overwhelming. So for me, it actually kind of happened by chance. Well, I was very dedicated that I had to find a really, really interesting master’s thesis when I was studying here at the University of Copenhagen, very determined, and I looked really outside the box. I spent several months kind of just looking for the topic. And luckily through an event, I met, at that time, my manager and a specialist within a company that at the end became my supervisor for my thesis, but the idea was basically, we collectively agreed that this is a good idea to work on a project that involved large amounts of data for me to go through the process it and get insights from my thesis, which was great. So it was not an actively conscious decision to say, yes, I’m going to do data mining for this particular company. But it was more kind of I’m really interested about this physical problem that I would like to solve, and the only way to solve it is to get through this huge amount of data. So for me, that was the transition. I got myself into this very awesome project. And from there on, the projects just became more and more interesting involving more and more data. And we started to shift away, the focus started shifting away from data science and then into machine learning and deep learning and kind of really expanded into different areas. So it was not a pursue I’m going to be a data scientist from now on. I’m going to run these models, it was more kind of these problems are so interesting to solve, and the only way you can address them was by a kind of looking into these methods.

Luke: Yeah, I’ve been doing this for a while now, and you certainly aren’t the first person that has fallen into Data Science, it used to be a big catching glove that catches people on the way past while they are trying to solve certain problems or achieve certain things. So, I mean, that’s certainly not unusual in that sense, but do you think that’s what the difference was? Because it sounds like your personal drive to sort of solve said problem eventually led you to work in a professional company doing what needed to be done to solve that problem. So why did it drop off of that point, if we were driven by, what we found interesting, what we want to achieve, what we want to come by, where is that division happening then to make that change?

Maria: From what I’ve seen through different discussions I had with my colleagues, the few female colleagues that I had, but also with the students from the university, the main blocker was we didn’t really know what a data science field was. I mean, we were educated into a way of thinking on problem-solving
and fixing problems with code and using different models and really figuring out how to solve problems, but it was not a label saying, ‘this is a career path for you, so this gap, as I mentioned before, of graduating and not being able to recognize your options. What options do you have? You don’t even scout for this type of job when you’re fresh out of university, so I have a set of friends that will not, they had exactly the same background as I had where I was working as a data scientist because of the way I’ve been recruited, but mostly for my friends, they didn’t even consider applying for data science role because they could not imagine how this how their skills would translate into this role.