WE SPECIALISE IN FINDING FANTASTIC OPPORTUNITIES
FOR DIGITAL AND DATA SPECIALISTS WITH THE MOST INNOVATIVE BUSINESS ACROSS EUROPE AND THE USA.

I'm a candidate looking TO...

WE'RE A DIGITAL & SPECIALIST RECRUITMENT BUSINESS AND HAVE BEEN IN OPERATION SINCE 2001, SOURCING THE BEST TALENT FOR BUSINESSES OF ALL SIZES ACROSS EUROPE AND THE USA.

Splunk: the data security solution taking the world by storm

For many companies, finding a data security solution that takes a wide-ranging view of your defences, weaknesses and threats is a real struggle. So by making the most of machine learning and AI tools and presenting the results in an accessible, real-time way, it's no surprise that California-based company Splunk is dominating the intersection between data and cyber security. Here's why those proficient in Splunk are in such high demand.

One of the main benefits of Splunk is that it takes a holistic and all-encompassing view of risk, and it can see across an organisation's risk field with ease. Each node in the system – whether that's a device, a person or some other entry point - is given a numerical risk value: by marshaling leading artificial intelligence and machine learning capabilities to find which threats are the most salient and which can be dealt with later, time efficiency savings are on the cards.

As an organisation, hiring a Splunk professional can be cheaper than using a complex data security system that doesn't have Splunk's prioritisation functions. So for those who are proficient in using the appliance, demand for services is booming. 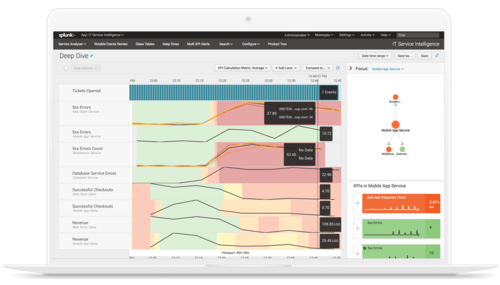 Some cynics might argue that data security is increasingly becoming a priority for pretty much every data and cyber security management tool – but there are some defined ways in which Splunk has built up competitive advantages.

First off, Splunk is capable of processing enormous amounts of data. As early as 2015, it was able to promise it could handle more than 400 terabytes of data per user per day, although it's now possible to scale up to unlimited amounts of data every day on some price plans.

And it's also got an interface which to some degree hides the complexity behind the mask. While it is, in fact, a tool that makes the most of machine learning and artificial intelligence, it mimics a software-as-a-service platform in how it operates – leading to increased user confidence.

According to PAC Online, in recent years up to two-fifths of Splunk's customer base has been devoted to clients looking for "Security, Compliance and Fraud" solutions. And it's no surprise. With benefits like these on offer, professionals who can install and embed this powerful data analysis tool are being quickly snapped up by security-hungry organisations.